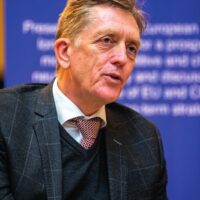 Former Director at DG Climate
Germanwatch e.V.
Thursday, May 12: Common Challenges, Joint Solutions - Multilateralism for climate action in transport
Artur Runge-Metzger was Director in the European Commission's Directorate-General for Climate Action until early 2021. For many years, he represented the EU in international climate negotiations, including co-chair of the ad hoc working group preparing the Paris Agreement. Previously active in economic cooperation in Bosnia Herzegovina, Zimbabwe and Ghana. He holds a doctorate degree in agricultural economics.Today, Artur continues to be active on the further development and implementation of domestic and international climate policies, and serves as Member on the Boards of AGORA Energiewende and the NGO Germanwatch e.V.