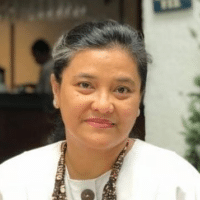 Co-Founder & Executive Director
Indonesia Research Institute for Decarbonization (IRID)
Thursday, May 12: Common Challenges, Joint Solutions - Multilateralism for climate action in transport
Moekti Handajani Soejachmoen is currently the Executive Director of IRID and one of the Co-founders. She has been working in climate change since early 1990s. Her first area in this issue was the scientific and modelling, especially in relation with energy-based sector. She continued to work on climate policy analysis as well as international climate negotiation up to present. During her time with Pelangi Indonesia, she was actively involved in the Climate Action Network (CAN) not only in Indonesia but also in CAN Southeast Asia and CAN International. She was one of the CAN International Board and CAN Southeast Asia. Her involvement in international climate negotiation started in the year 2000 during the meeting in Lyonn leading to COP-6 in the Hague. After finishing her tenure as the Executive Director of Pelangi Indonesia in 2010, she joined the Office of Indonesia’s President’s Special Envoy (PSE) for Climate Change for 2 terms (2010-2014 and 2015-2019), where she assisted the PSE in international climate negotiation, including during the preparation of the Paris Agreement. After COP21 in Paris, she was assigned to the Indonesian negotiating team on Article 6 of the Paris Agreement up to present. She has been involved in a number of studies and policy analysis related to climate change, energy, transportation and air quality. Kuki is currently the Lead Co-Chairs of Thematic Focus 3 on governing climate target, energy transition and environmental protection of the Think-20.