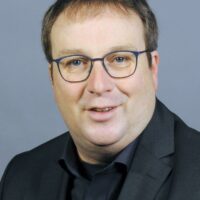 Parliamentary State Secretary
Federal Ministry for Economic Affairs and Climate Action
Wednesday, May 11: Opening Plenary
Monday, May 09: Welcome by BMUV, BMWK & GIZ
Oliver Krischer has been a member of the German Bundestag since 2009, when he joined the Committee for Economic Affairs and Technology, and became a spokesperson for matters related to the energy industry within the ALLIANCE 90/THE GREENS parliamentary group. Between 2013 and 2021 he moved on to become the deputy leader of the ALLIANCE 90/THE GREENS parliamentary group and political coordinator of Working Group 2 (environment, nature protection, nuclear safety, animal welfare, climate, energy, sustainability, building, living and urban development, transport, agricultural policy and nutrition, tourism, rebuilding eastern Germany).  As of 8 December 2021 Mr. Krischer is the Parliamentary State Secretary at the Federal Ministry for Economic Affairs and Climate Action.