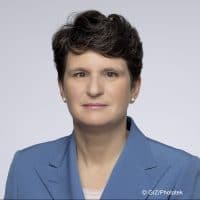 Tanja Gönner was appointed Chair of the Management Board of the Deutsche Gesellschaft für Internationale Zusammenarbeit (GIZ) GmbH in July 2012.
She was a member of the German Bundestag before she became Minister of Social Affairs of the state of Baden-Württemberg in 2004 and took over at the helm of the Environment Ministry in 2005. From 2010 until 2011, Tanja Gönner was Minister for the Environment, Nature Protection and Transport of the state of Baden-Württemberg.